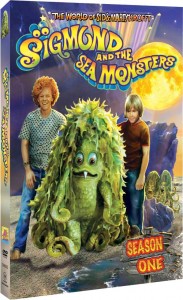 The entire first season of the classic Sid and Marty Krofft series
makes its return to DVD with a three-disc collection.

Los Angeles, CA; July 11, 2001 – Sid and Marty Krofft redefined Saturday morning television for children in the early 1970s with wonderfully colorful shows likeH.R. PufnstufandLidsville. In 1973, the sibling puppeteers introducedSigmund and the Sea Monsters, their fourth series in five years and one of their biggest hits.

The imaginative series, which originally aired on NBC from 1973 to 1975, followed the adventures of Sigmund Ooze – a friendly googly-eyed sea monster that ran away from his family after refusing to frighten people – Johnny and Scott Stuart (Johnny Whitaker and Scott Kolden) – played brothers who befriend Sigmund and kept him hidden in their backyard clubhouse.

Vivendi Entertainment presents a three-DVD set with all 17 episodes from the show’s debut season, bringing these treasured stories back into print after an absence of several years.SIGMUND AND THE SEA MONSTERS: SEASON 1will be available September 6 at all retail outlets for a suggested retail price of $29.93.

The set’s special features include commentaries by Whitaker and Kolden, plus an exclusive look at last year’sH.R. PufnstufAmerican Cinematheque event in Los Angeles. The extras also include a downloadable folder with MP3s of all the songs Whitaker performed at the end of each episode.

SIGMUND AND THE SEA MONSTERS: SEASON 1is the second release to emerge from the Krofft’s exclusive partnership with Vivendi Entertainment. Formed last year, the collaboration promises to produce a series of DVD sets that highlight the Krofft’s iconic catalog of children’s television shows.

The arrival ofSIGMUND AND THE SEA MONSTERS: SEASON 1in September will cap a busy few months for the Kroffts. It began in April with the launch of www.sidandmartykrofft.com, the online home for all the latest news from “The World of Sid and Marty Krofft.” The brothers also announced that they will appear at Comic-Con International in San Diego on Friday, July 22 to take part in a panel to discuss their past, present and future. The panel will begin at 10 a.m. in Room: 23ABC at the San Diego Convention Center, and will be hosted by supermodel and actress Angie Everhart.

One subject they are sure to touch on is the recent announcement that DreamWorks Animation is bringing the beloved 1970’s television serieLidsvilleto the big screen in a feature film. Animation veteran Conrad Vernon (Monsters vs. Aliens, Shrek 2), who is a lifelong fan of the Krofft’s work, initially brought the project to DreamWorks Animation. The Kroffts will also update fans about theH.R. Pufnstuffeature that is in development at Sony.

The Kroffts have been producing entertainment treasured by families for more than 40 years. Sid & Marty rose to prominence in the ’70s with a series of remarkable programs that featured elaborate sets and fanciful characters. H.R. Pufnstuf was the first in a long line of popular programs created by the Kroffts, includingThe Bugaloos, Land Of The Lost, Sigmund & the Sea MonstersandThe Krofft Supershowwhich includedElectra Woman & Dyna Girl, Wonderbug, Dr. ShrinkerandBigfoot & Wildboy, to name but a few. The Krofft’s success led them to produce various prime-time series and specials, includingThe Brady Bunch Hour, The Donny & Marie ShowandBarbara Mandrell & The Mandrell Sistersseries.

Synopsis:
Sigmund Ooze is a green, scaly sea monster who can’t seem to scare anyone. Thrown out of the family cave for being a bad sea monster, Sigmund is befriended by two brothers, Johnny and Scott Stuart (played by Johnny Whitaker and Scott Kolden), who keep him hidden in their backyard clubhouse. This is the story of three young friends as only Sid and Marty Krofft could imagine it. The show premiered September 8, 1973, on NBC. It became one of the brothers’ biggest and most memorable hits.

About Sid & Marty Krofft
Brothers Sid & Marty Krofft have been producing quality family entertainment for over 40 years. Sid & Marty became a household name in the ’70s with a series of remarkable programs that featured elaborate sets and fanciful characters. H.R. Pufnstuf was the first in a long line of beloved programs created by the Kroffts, including The Bugaloos, Lidsville, Land Of The Lost, Far Out Space Nuts, Lost Saucer, The Krofft Supershow Hour, The Bay City Rollers Show, Wonderbug and Bigfoot & Wildboy. The Kroffts’ success with Saturday morning television prompted a demand for them to produce prime-time programming. They produced various prime-time series and specials, including The Brady Bunch Hour, The Donny & Marie Show and Barbara Mandrell & The Mandrell Sisters.