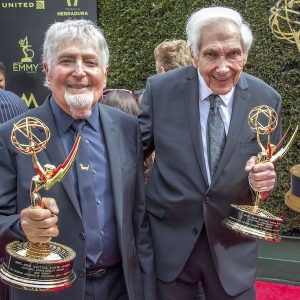 Having gotten their start as puppeteers the brothers were quickly noticed for their talent for their show “Les Poupees de Paris” the show which Marty says launched their careers. It wasn’t long before they found themselves in the company of Walt Disney himself, whom offered them advice upon meeting. “Always put your name above everything that you create because someday it’ll be worth something.” The brothers took this advice to heart and it wasn’t long before NBC approached them asking to make their own show. The result was H.R. PufNStuf, and was among the first of many hit titles that dominated weekend morning TV.

To this day the brothers are still producing shows, both fresh concepts such as “Mutt & Stuff” and reboots like “Sigmund & the Sea Monsters” which dropped on Amazon Prime in back in October of 2017.

Fast forward to April 27th, Sid & Marty stand together on the red carpet, reflecting upon their achievements of joy, laughter, and magic that they provided viewers over the years. When asked about what his secret to success was Sid replied “Get a Marty for a partner.” When asked who his favorite character was, Marty replied “My favorite character’s gotta be Sid.”